Author of 19 Books including:


Poetry & Fiction (LET PEAS BE WITH YOU, MURDER IN THE SKIN TRADE)


Non-Fiction Humor (WHO'S WHO IN COMEDY, STARS OF STAND-UP,


Non-Fiction (POE IN THE MEDIA, HORROR STARS ON RADIO)

YARNCRAFT (like it says, co-editor with his significant other,  Suzanne)

CD album notes for various releases (including albums by Flip

in everything from Reader's Digest to Writer's Digest, from

Dogs and Sheep! and American Horseman to

Teacher, Videoscope and Video. For Video he interviewed Gumby

creator Art Clokey and did a cover story interview with

and BOB NEWART. The show was a syndicated half-hour featuring

As one of the leading authorities on comedy, Ron's appeared on the major networks, commenting on everything from the death of Johnny Carson (NBC)

He's appeared on news talk shows from Rita Cosby to

Bill O'Reilly, and on the A&E Biography episodes for

Bill Cosby and Julie Newmar. Ron was a paid extra for Howard Stern's

the voices for the Oxford "Dial-a-Pickle-Joke" campaign. He's been

interviewed on dozens of radio shows.

Below, you can read my mail.

In the course of writing so many books and magazine articles, I've

corresponded with many celebrities, and some have become friends.

Below is a random assortment. I picked ones that didn't

self portrait on cardboard

It's kind of interesting how some stars have

modest letterhead, or write long-hand...isn't it? 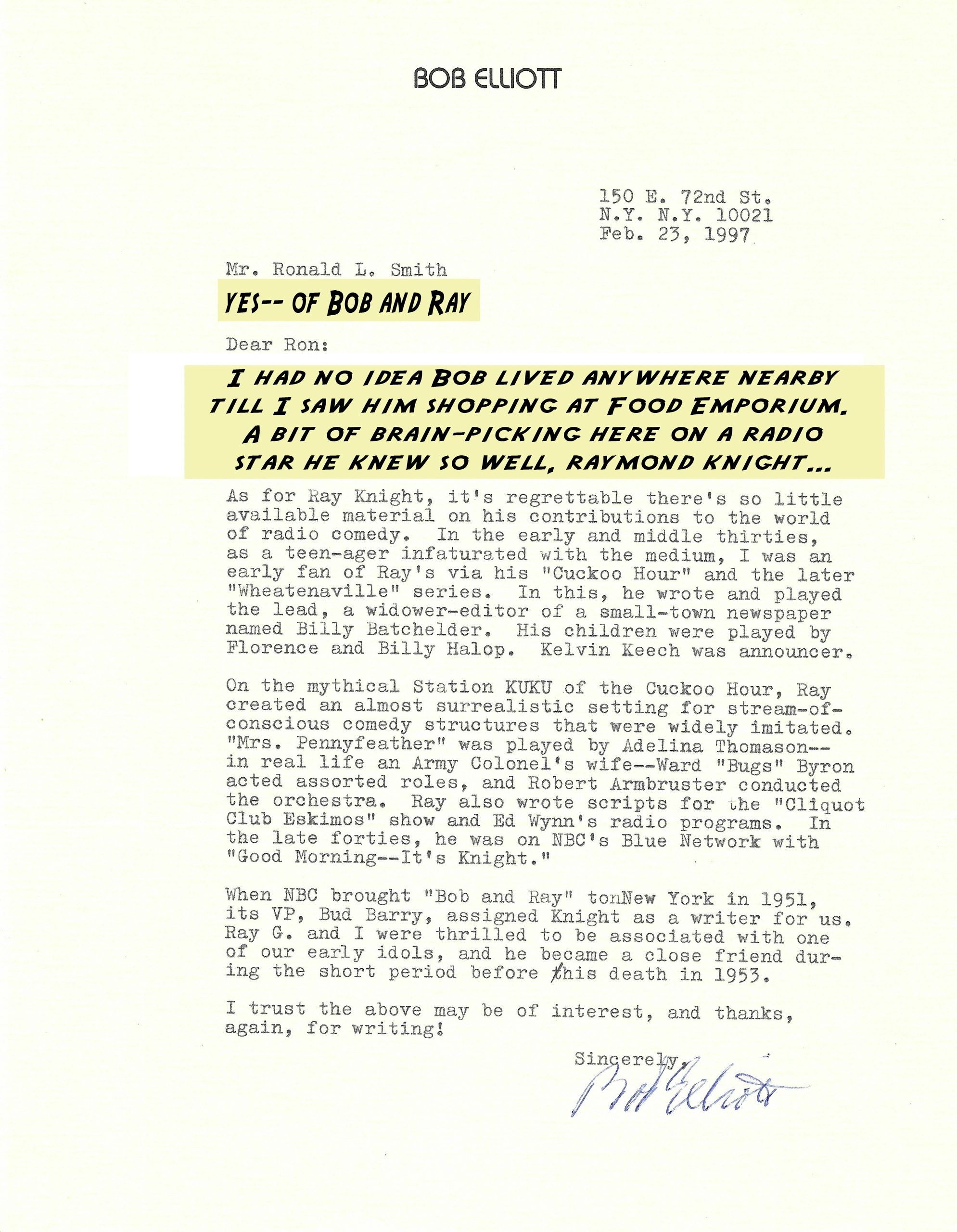 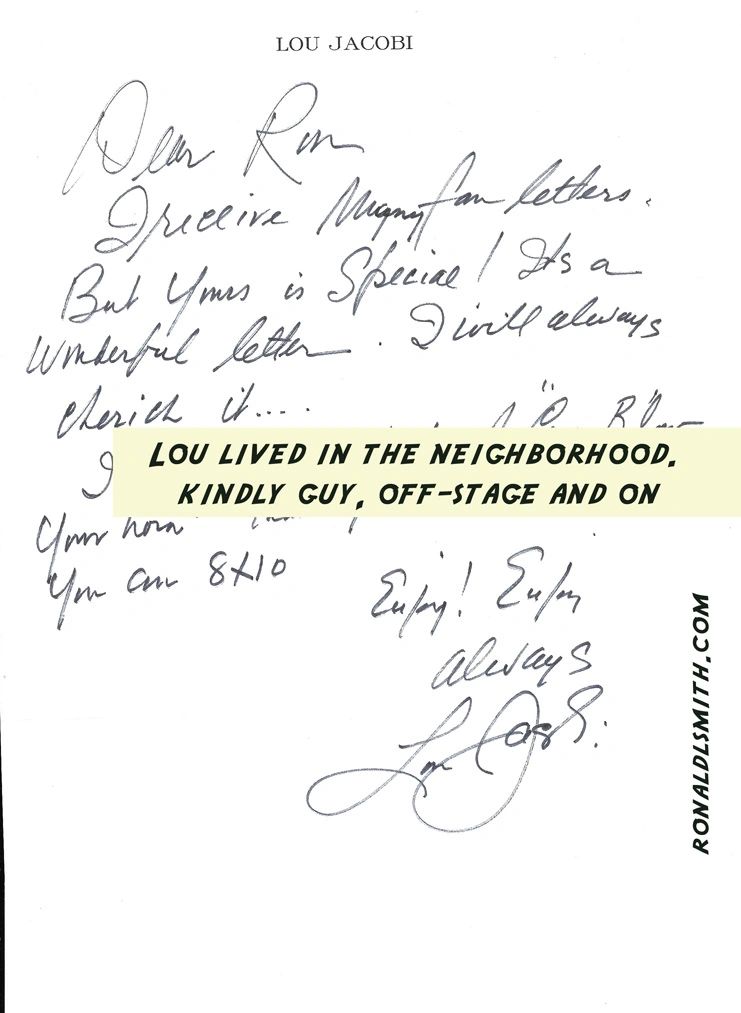 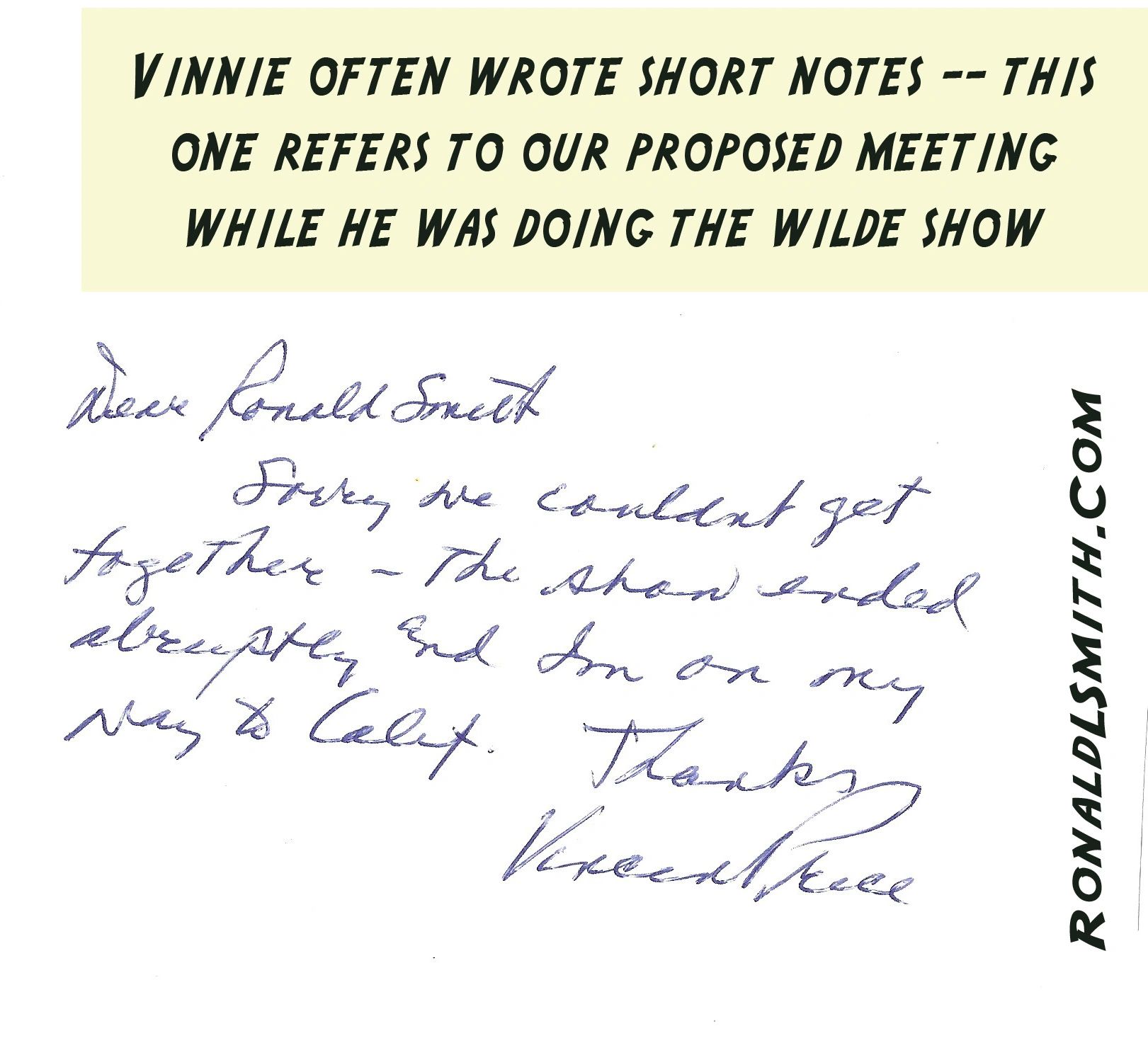 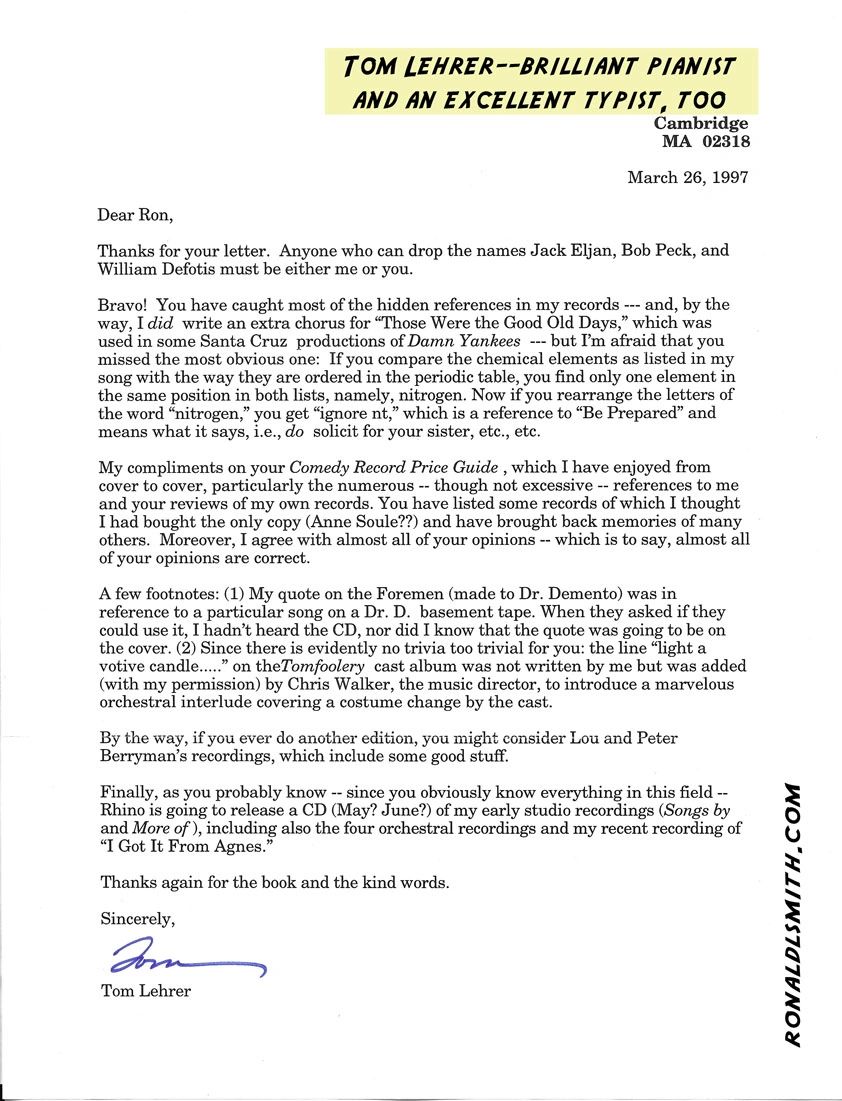 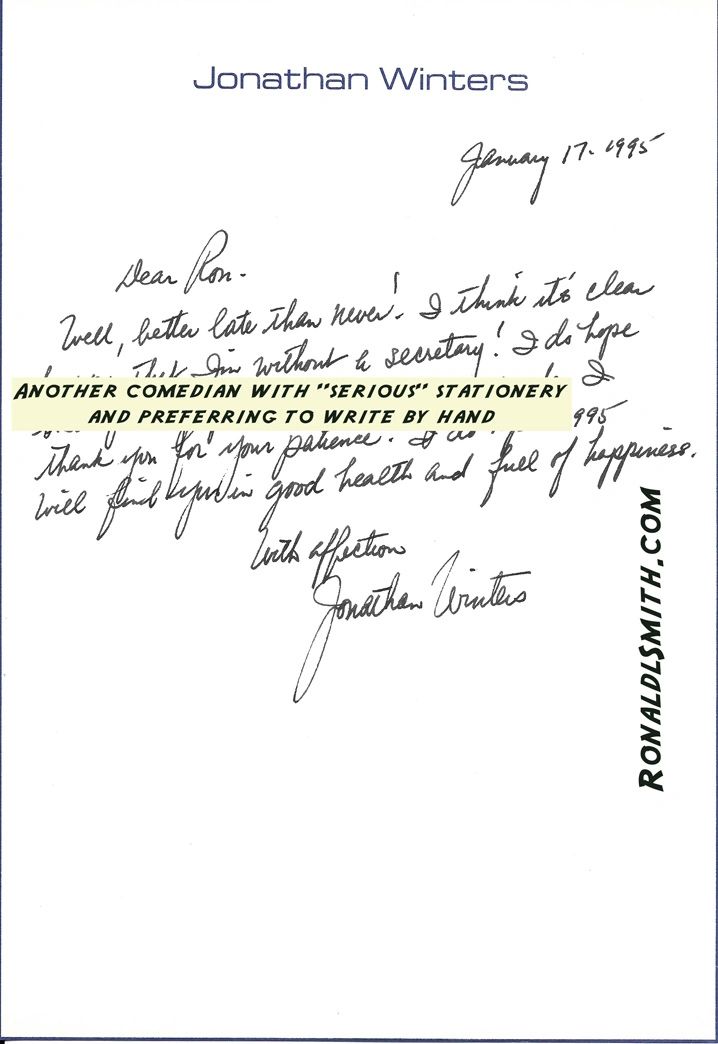 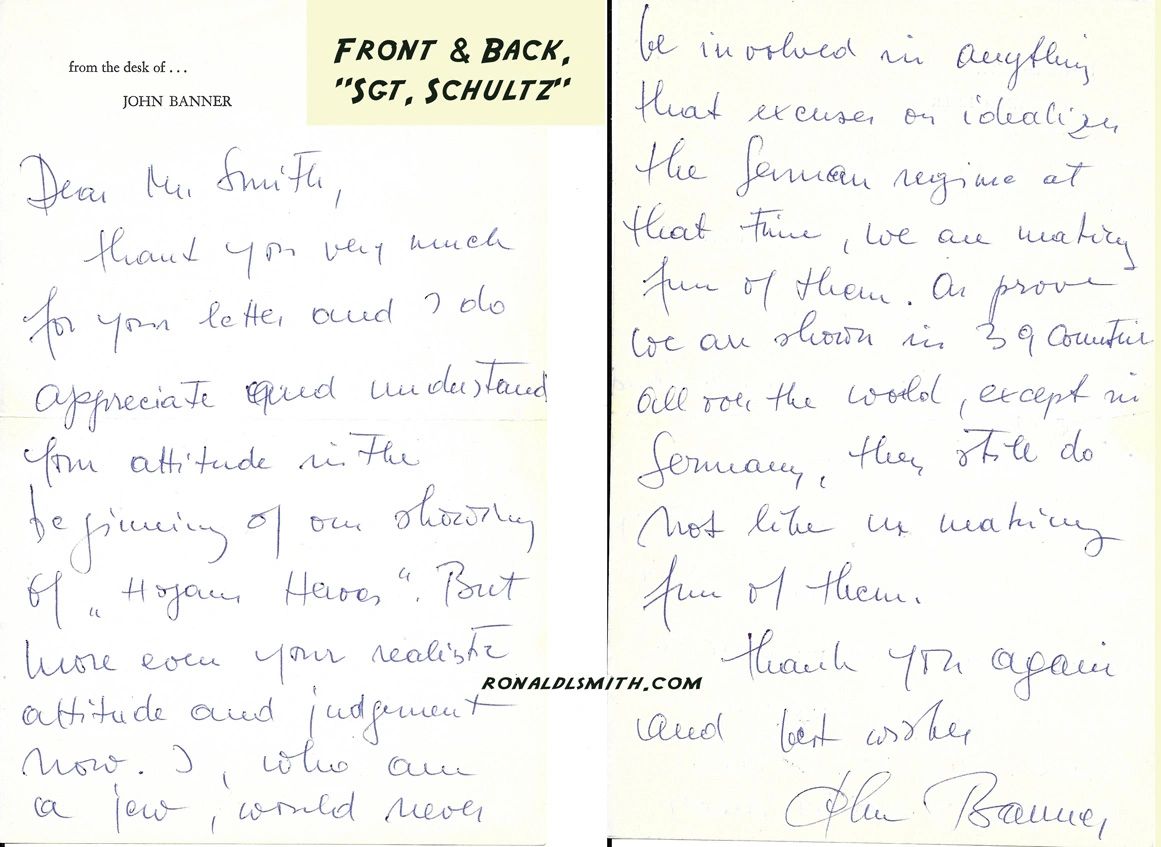 When I was a precocious junior high school student, I began writing

fan letters. It gave me a boost to actually get letters and autographed

photos back from these famous and busy stars.

One amazing thrill was when my idol Paul Frees didn't write...

but phone me instead. I was almost to awe-stricken to talk.

My confidence as a writer began to build as well, as aside from

school assignments and gold stars and whatnot, I was getting

validation from creative people who appreciated what I wrote.

I knew a guy who wrote fan letters as a hobby. He had

a form letter. He told me "secretaries handle fan mail. I want

the autograph. I know the star won't read what I wrote."

I figured if you were sincere, wrote something unique,

it would get attention. Before I had reason to write to

to mention how their work affected me. I sometimes  included

unusual pix and collages to prove it.

mail, but a collage of an early photo of himself, standing in the Paris

catacombs with a cat?

The ability to verbalize what was so touching and important

about these performers, would allow me to move on to movie,

TV and book criticism in everything from VIDEO magazine

to the CHICAGO TRIBUNE.

No question about it...getting letters back from MOE of the Three

Stooges and Julie Newmar, helped inspire me to focus on a

career where I would someday write "The Stooge Fans' IQ

Today, people meet a celebrity, ask for a SELFIE, and grin.

They go to a book signing, get a signature and walk.

That's fine for a thrill, but it's not exactly communication.

Below, just a random assortment, some from my

fan days, some in person when I was working on projects,

a lot of comedy stars signing pix while returning my questions

or proofs relating to my various books  None bought at memorabilia

shows. Some were chosen  for the pose, or odd comment

(Tom Poston is responding to my recalling a fumetti

that appeared in HELP! Magazine ).

FAVORITES FROM CHILDHOOD I GREW TO KNOW